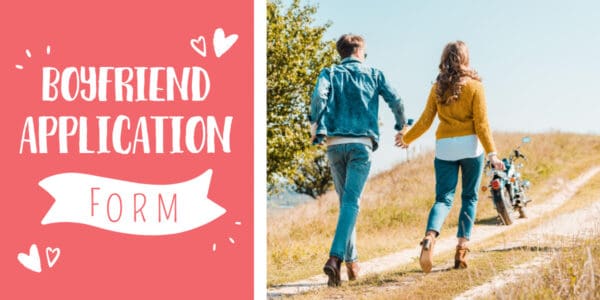 The boyfriend application form will help you screen potential candidates to find the perfect boyfriend.

There are two versions of the form:

I hope that the bf application helps you find the love of your life!

The Word version is editable if you want to change the questions. The PDF version is typeable so you can type the answers. 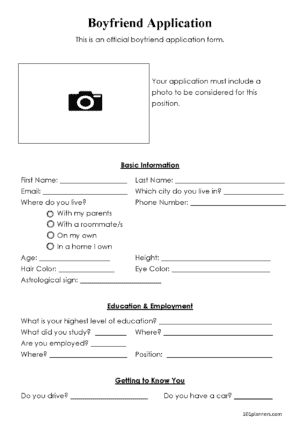 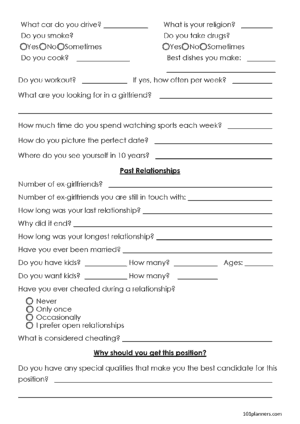 This dating application form has some funny questions such as how much do you earn, how do you leave the toilet seat, where do you leave your dirty socks and underwear, etc. The Word version is editable if you want to make changes. 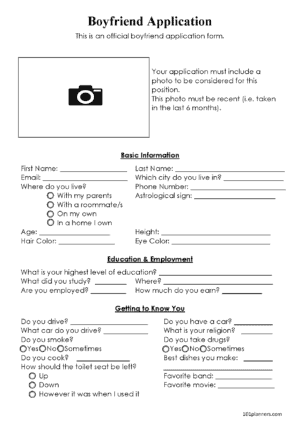 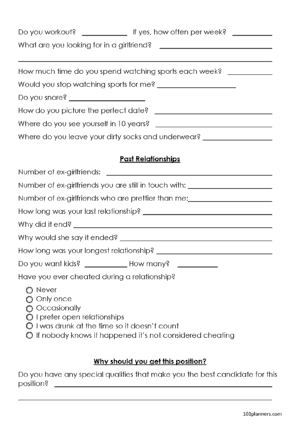 Have you ever tried online dating? If you have, then you will know how confusing it is. You talk on the phone for the first time and try to get to know each other to see if it is worth your time to meet. Once you meet both sides have to want to meet again. I don’t know what the stats are but I usually talk on the phone with 1 out of 30 people I chat online with and actually want to date 1 out of 10 people I speak to. I then want a second date with 1 out of 10. The problem is that you need to talk to so many people just to find the person you want to date more than once.

And it gets so confusing! At the beginning of the conversation, you don’t know he/she is a keeper so you need to listen to everything. When you go on to the date, you don’t remember what you spoke about on the phone and you can’t ask again.

To further complicate matters, sometimes you have 4 or 5 people in the screening process at once.

So, to solve this problem, I created this form that I fill out during the first conversation. If I do decide to date the person, I read it over before the date. I included the basic questions that I usually ask on a first call, but if you ask different questions, then feel free to make changes to the Word version. I also added a section to write about red flags. This makes you actually give some thought to whether or not there were any red flags and it can save you a lot of trouble and heartache down the road. I also ask why the previous relationship ended, I try to understand how the person treated their ex before and after the breakup. This gives me an idea of how they might treat me someday and it says a lot about a person in my opinion. To me, this is a red flag but there are many other red flags and things to look out for but they will differ from person to person. You will include things that are red flags for you. 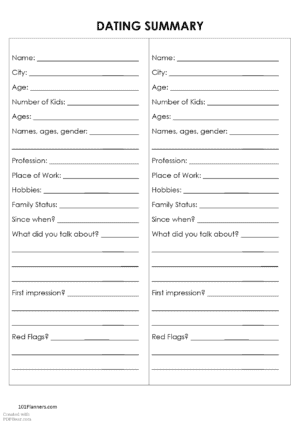 I got divorced about 18 months ago after which I went on a series of dates. I call them dates but they were more like job interviews. I’m 48 years old although I am in total denial and that just looks like a typo to me. I don’t feel 48 and I think I don’t look 48 but that might just be my personal opinion.
Candidates were invited to participate in the screening process via a dating app. Every candidate underwent a thorough interview on the phone before the first date. I then agreed to actually go on a date with about 2% of the men I had previously had contact with. During the first date, candidates who had made it to this stage were then interviewed again. Looking back, I feel bad for the poor guys who thought they were going on a date and found themselves in an interview. However, only one decided that the interrogation was too much for him and, to be honest, he wouldn’t have made it to the next stage anyway.
I only had one bad date and the rest were relatively ok. I had an interesting time on most dates except one that felt like it would never end. It was with someone doing a Ph.D. in history focusing on the period between 1952 and 1953 and for some reason, he thought I would be interested in hearing about the details. I wasn’t :). As I started to plan my getaway, he started to plan our wedding. Besides that date, I actually enjoyed the others and I know it is because of my intensive screening process.
I didn’t actually give candidates the form but I did ask them all the questions and more. After the intense interrogation during the actual date, I only wanted a second date with two of the candidates. The first one seemed too good to be true but was so attached to his phone it started to look like his oxygen source. The second one turned out to be the love of my life and I am still madly in love with him. I am quite certain that the questions from the boyfriend application form helped me find someone compatible. Therefore, it is a good idea to ask yourself: What are you looking for in a relationship?
There is one tip I can give you if you are currently interviewing applicants for this position. When you start interviewing candidates you will remember each person’s story. However, when you start interviewing the fourth person you will no longer remember which one lives with his mother, which one doesn’t have a job, and which one sounded a bit scary. This happens often when you try online dating and you have no idea who you are talking to and there are so many options and possible candidates that it is downright confusing! To prevent confusion, you will want to make a few copies of the short bf application and you will want to take notes. Put all applications in a binder and keep them somewhere safe. You will not want any of the applicants to see this binder as they might resign before they even get the job. If they do land the job, then burn the binder or put it in a safe with maximum security around the clock. On each application fill out the details after your first phone call. Write your general impression and take notes. Keep the notes with you at all times so that if someone calls unexpectedly you can check to recall who he is. By the way, do not write the details on your phone. There are apps today that show people how you name them in your contact list. “Jessie – no job and no car” is something you write in your binder and not in your contact list. I wish someone had told me that before I started using descriptions in my contacts wrongly assuming that my personal phone is private:)
Some of the men I spoke to clearly had no system to record basic details about the women they were talking to. They would sometimes ask me the same questions twice or say things that were clearly meant for someone else or a response to another conversation with another person. It just helped me move them from the list of potential candidates to those kicked out of the process sooner. I mean, I know it gets confusing BUT find a system to remember who you spoke to and what you spoke about. Seriously!
Click to rate this post!
[Total: 0 Average: 0]