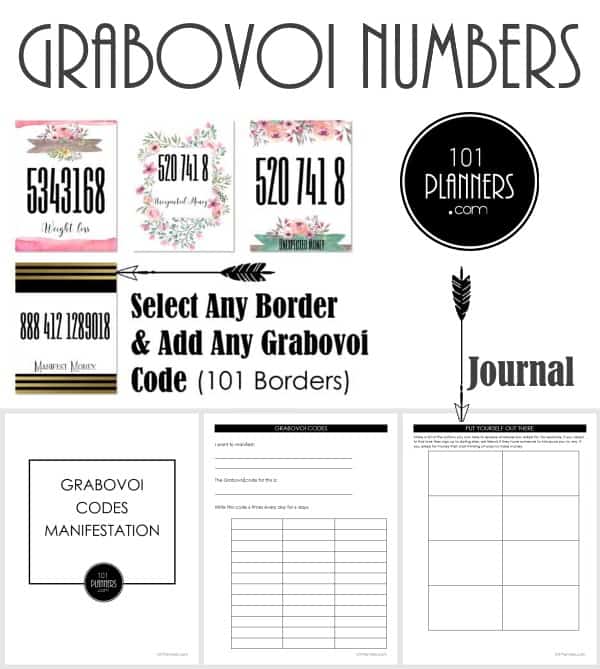 Please note that this article was written for informational purposes only. It is not intended to provide medical or financial advice. Don’t rely on the Grabovoi Healing Codes to heal ailments, help you financially, etc. Always seek the guidance of your doctor or another qualified professional with any questions you may have regarding your health, weight loss, or finances.

Grabovoi codes (are also known as Grabovoi Numbers) are specific number sequences. These sequences are not just random numbers. Each of the numbers has a meaning and a purpose according to the Russian mathematician, healer, and psychic Grigori Grabovoi. The numerical sequences are a string of numbers that are said to have the power to change circumstances, situations, and health for those who use them consistently and correctly. The Grigori Grabovoi codes became a popular trend after they went viral on Tiktok and other social media.

Who Invented the Grabovoi Codes?

The Grabovoi codes list was invented by Grigori Grabovoi, a Russian mathematician. Some think he’s a brilliant fraud and others suggest him to be the second coming of Jesus – healer, martyr, and miracle worker. He was born in 1963 in Kazakhstan, although his family is of Ukrainian heritage. His educational background is in mathematics and mechanics and in 1986 he graduated from Tashkent State Polytechnic University in applied mathematics and mechanics.

After graduation, he put his expertise to work for Uzbekistan Airlines. The company was attempting to make the aircraft safer because it was responsible for the safety of the President of the Republic and other members of the government who were regular passengers.

(He was later sent to prison for defrauding people see here)

How did he come up with the numbers?

Electromagnet therapy radiation is a form of alternative medicine. Abrams wrote two books describing electromagnetic therapy (EMT) in 1909 and 1910. His assertion was that since all life forms share common ground through the electromagnetic field of the earth, we are all connected in some way.  Therefore, electromagnet radiation (EMR), which are basically radio waves, can be sent into the body to determine the cause of the ailment. The term for this remarkable healing method was also called Radionics. Albert Abrams’ contribution was the idea that each ailment has a particular frequency that could be identified and cured by way of radionics.

Back to Mr. Grabovoi. In his book “Restoring the Human Body by Focusing on Numbers” Grabovoi indicates that “every disease of an individual is a deviation from the normal cells, organs or the whole organism. The treatment of the disease then means a return to the norm.” Coincidentally Mr. Grabovoi uses Radionic signatures to pinpoint the health issues, sickness, financial worries, and other ailments in order to determine the correct sequence of numbers to be repeated. (source).

Is it pseudoscience or does it actually work? Many people say that repeating the Grabovoi number sequence and following the process has eliminated health issues and/or created financial wealth. The only way to know for certain is to try the method. And why not? It’s harmless, might be fun, is an easy process, and might just be what the doctor didn’t order.

Please note that the spaces between the numerical sequence are intentional here and specific to the process. See the Grabovoi numbers pdf below.

There are more Gravodi codes for money but these are the most common ones. 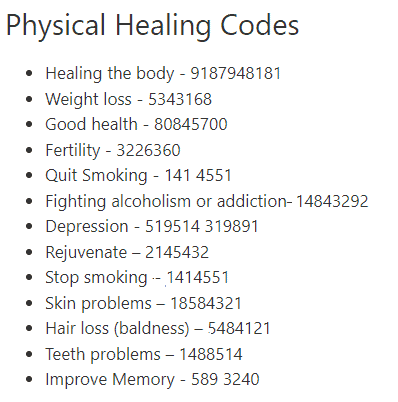 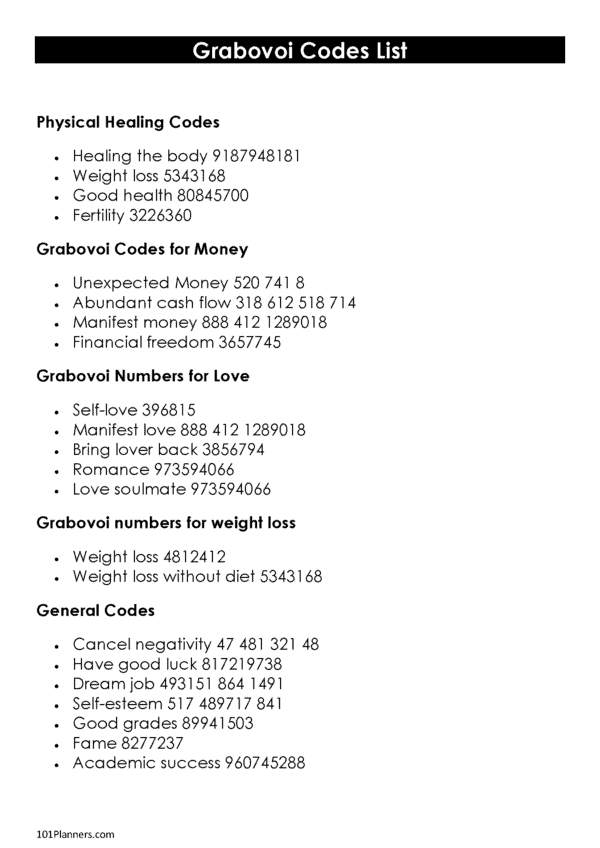 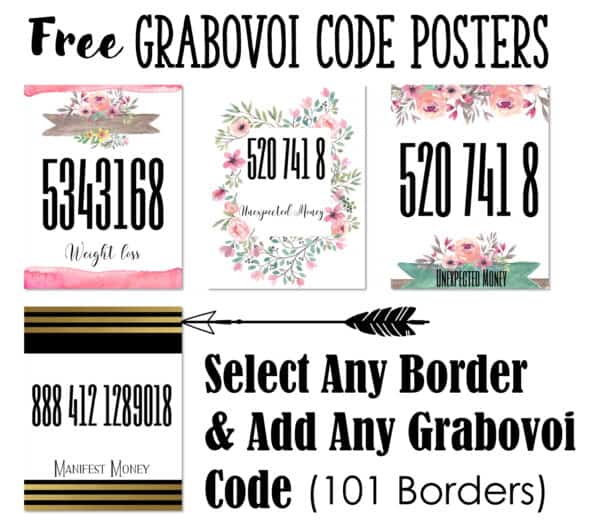 To create a poster with your manifest code

How to Use Grabovoi Numbers to Manifest

Some people refer to the numbers as cheat codes of the Universe that can be used to heal or manifest your desires according to the law of attraction. The process for invoking the numbers to heal, help, or manifest is quite similar to hypnosis. The most important part is to focus on the manifest number sequence with concentration. If you can memorize them, that is best, if not then write them down on a piece of paper to keep close by for reference. Repetition of the sequence and focus while reciting the numbers is the key to opening your manifestation portal.

The process is simple, but not easy. You’ll want to ‘hear’ yourself say each number in your mind or aloud. Repeat the whole sequence of numbers at least 3 or 4 times, 5 or 6 is better. Be specific about each number’s grouping, and don’t mix requests.

The numbers without spaces should be said without a pause between numbers. For those with spaces between numbers, a short pause, three seconds or so, will suffice. Then repeat that number again.

Lastly, write yourself a script that is the same or similar for every code. For example:

After saying one code several times you can add in another code for a different challenge.

You can also use the code you are trying to activate as your password. For example, if you want to manifest unexpected money, then change your bank password or any other password related to money to 5207418.

Create posters with the code and hang them in your home and office. See below.

How to Activate Grabovoi Codes in Writing

You can also use this Grabovoi codes journal to activate a number sequence.

This planner is specifically for code 5207418 to manifest unexpected money. 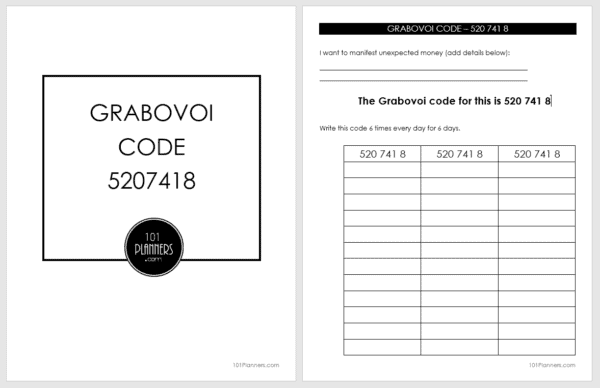 Are Grabovoi Codes the Same as Angel Numbers?

Angel numbers are patterns or sequences of numbers that are the same. They appear anywhere and everywhere. Clocks (3:33), purchase receipts ($4.44), days on a calendar (11/11). According to numerology, the study of numbers as they relate to personality, these sequential numbers are meaningful and spoken to us by Angels.

Anytime you see recurring sequential numbers you are being invited by your angels who are encouraging you to continue on your path. You are being seen and heard and it’s their way of saying ‘Carry On!” Angel numbers differ from Grabovoi numbers in that you are receiving affirmations through Angel numbers, whereas Grabovoi numbers are making you open to receiving whatever it is you wish to change.

If you want to print the list of numbers then see the Grigory Grabovoi number codes PDF above.