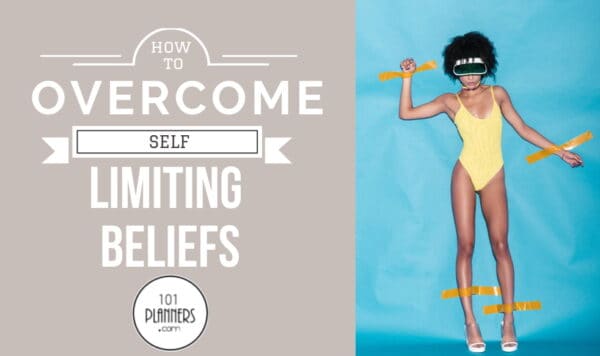 What are Limiting Beliefs?

Limiting beliefs are a collection of opinions of ourselves, our abilities or potential that hold us back in some way. These beliefs are formed unconsciously based on our childhood or other life experiences. Very often they are simply untrue and are misinterpretations of past events. For many people these limiting beliefs hold them back from living their best life. The problem is that once we have these beliefs we are not able to reach our full potential and this reinforces the belief you had in the first place. It is a vicious circle that is hard to get out of. However, if you can overcome your limiting beliefs, you can turn things around and achieve things that were not possible when they held you back.

Most people have some limiting beliefs. Let’s start with a simple example. Your boss asks you to lead the weekly team meeting 10 minutes before it’s supposed to start. Your colleagues are great and you know everyone fairly well.
You’ve led small group meetings at your church, with your bowling team, and even with your pickleball friends. But leading a meeting at work could put your credibility at risk. What if you stammer or say something ‘wrong?’ What if you say the new guy’s name wrong? What if you don’t have a morning joke or give the punchline away?
With all of that going on all you can hear in your head is how terrible that meeting you led with your 5th-grade scout troop turned out. That nagging reminder that you once made a mistake will haunt you forever.
If you let it.
Maybe public speaking doesn’t affect your willingness to lead a last-minute work meeting. Or maybe you fear success. Sadly, self-limiting beliefs are not limited in scope.

Here are some examples of limiting beliefs:

Do you hear yourself in any of those sentences?

What are the causes of limiting beliefs?

A child’s mindset starts to develop during early childhood. This is where limiting belief begins. Generally speaking, limiting beliefs are caused by negative experiences that leave an impression on our subconscious mind. Typically, these false beliefs or stories become embedded when the experience is either repetitive or we are very young. If the thinking was embedded very early in childhood, it might have been a survival mechanism – don’t be ‘right’ because the adult doesn’t like it when you are right. Another example, if an older sibling was the favorite of a parent or other caregiving adult, the younger sibling might come to believe that he/she is not good enough and withdraw. (limiting belief: I’m not good enough). The child may not act out with bad behavior, but instead create a limiting belief that they are helpless or worse, stupid and incapable.

Why is it important to break free of Limiting Beliefs?

Firstly, limiting beliefs constrain us and do not allow us to reach our full potential. Our own limiting beliefs prevent us from doing things because we assume we can’t do things that we probably can do. We often make some excuse for not even trying to prevent the potential humiliation if we do try and land up failing. The probably is that if you never try then you will never succeed. Our immediate assumption is that we can’t do something before we even consider doing it.
Have you ever been played a CD and suddenly it skipped to the last song? Continuously playing. Over and over. And it was your least favorite song on the album. Annoying, right? And stuck. Well, that’s a lot like the behavior of your subconscious mind.
Let’s play this out in a scenario. You’ve been offered a promotion at your job. You know you could do the job; in fact, you’d really like to have the job. BUT… the pay is twice what you’re earning now, and it just doesn’t feel right. The job is a dream come true. The money would put you out of debt and you could replace the 2010 Toyota you’re keeping together with a wish and a prayer. But geez … all that money will change things. (limiting belief: Money is the root of all evil, or, I am not good enough for such a job)
Are you stuck? YES! Is it necessary to break free of embedded limited beliefs? YES! The reason seems obvious, but it isn’t an easy task.
You see, the subconscious mind – where all this information is being stored – never wants to change any thoughts or behaviors. It is the ‘Guard at the Door’ of your Limited Beliefs, and its job is to make you as uncomfortable about changing that belief as buying a pair of shoes a size too small to fit your feet. It will nag, whine, and scream, if necessary.
In another scenario, you take the job with its enormous salary. You replace the Toyota, pay off your debts, and go on a cruise. Which scenario sounds more life-enhancing? Being stuck or being free? The choice is yours.

Self-limiting beliefs diminish your capacity to be the wonderful person you were meant to be.

How to identify your self-limiting beliefs

You probably already know what they are because your subconscious mind will continue to nag you about them. Our free printable workbook below will help you identify five limiting beliefs you have. Here are some tips on how to identify them.

How to overcome your self-limiting beliefs

Firstly, it should be noted that our belief system developed over many years so you cannot expect to change it overnight. Overcoming limiting beliefs is totally possible, but it takes time.

Usually, there are other explanations that you didn’t even consider before you adopted the alternative belief. Try to list as many alternatives as possible. This exercise will show you that your limiting belief isn’t even necessarily true.

Hire a hypnotherapist to do the work with you or use self-hypnosis. Hypnosis is sometimes used to understand why you developed the limiting beliefs in the first place. It is also a sure-fire way to change the pattern. If you choose to start alone, there are numerous books and articles, etc. that will teach you a simple form of self-hypnosis to overcome self-limiting thoughts.

There are various ways to do this. For example, in the book “The High Five Habit”, Mel Robbins suggests you high-five your reflection in the mirror in the morning. You need to look at yourself lovingly and give yourself an encouraging high-five. In the book, Robbins actually mentions research that was done to prove how helpful this is. It doesn’t work overnight but if you are consistent then it actually helps. It sounds like such a simple gesture yet it is really powerful.

Another thing you can do is to kiss the person you see in the mirror! It sounds silly but it is also very powerful. Using positive self-affirmations, look yourself straight in the eyes and speak up. ‘I will no longer (fill in the blank) when (fill in the blank) because I am the powerful changemaker of my life.’

Think of an experience in the past that caused you to be hesitant today and just start writing. Don’t think about what you write just let everything come out naturally. You can also use our free printable journal below.

EFT is a physical process known as tapping. It is an easy process to learn, but you must be consistent in using it daily.

Repeating positive affirmations consistently will improve your self-image and self-esteem over time. It is best to create your own affirmations rather than using someone else’s. Affirmations should start with I or My to make them personal. See how to write affirmations.  Some examples are:

You can work with a licensed therapist to get to the bottom of why you are holding yourself back and how you can overcome this. A therapist will often have insight that you might not be able to understand on your own.

Make a list of all the self-limiting beliefs that are preventing you from living your best life. List all the negative messages that you tell yourself about your body, your mind, your abilities, your future, etc. Apologize to yourself for thinking such negative thoughts about yourself. Promise yourself that you will discharge these thoughts and start thinking positive and empowering thoughts. Take the list that you made and destroy it. If you can burn it, then that is great. It will help you discharge and release these negative thoughts.

Use the workbook journal below to understand how each of your self-limiting beliefs started and use the journal prompts to overcome each one. 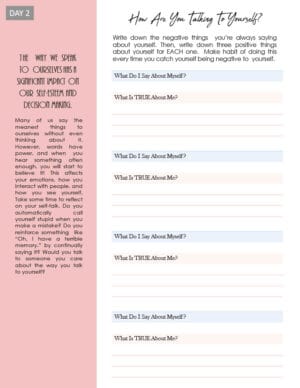 If you don’t want to use a complete journal then use this single worksheet to identify your limiting beliefs. This worksheet is part of our free self-care journal.