The Julian day today is 270

What is the Julian calendar?

Who created the Julian calendar?

Julius Caesar invented the Julian calendar in 46 B.C. Julius did not do all the work alone; he was helped by Greek astronomers and mathematicians such as Sosigenes.

The earth takes approximately 365 days, 5 hours, 48 minutes, and 45 seconds to make one complete rotation around the sun. Inspired by this information, Julius and the team designed a 365-day calendar.

The leap year averages 365.25 days, while a solar year features 365.24219 days, which means that the Julian date calendar gains a day after every 128 years. This is one of the main reasons the Gregorian calendar replaced the Julian calendar after centuries of use.

The numerous leap years in the Julian calendar affected important religious events such as Easter, which was out of sync with the dates for solstices, equinoxes, and other astronomical events.

Here is a free printable Julian date calendar in a yearly and monthly format. You can download it as an image or a PDF file. See the top of this page to see today’s date with our Julian date converter. 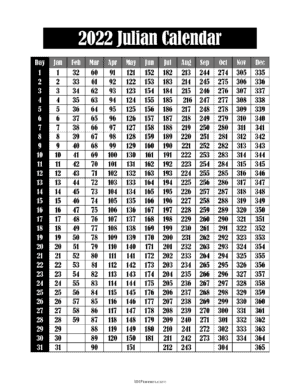 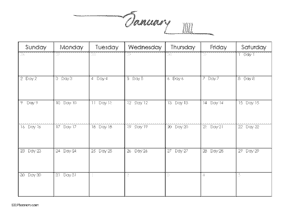 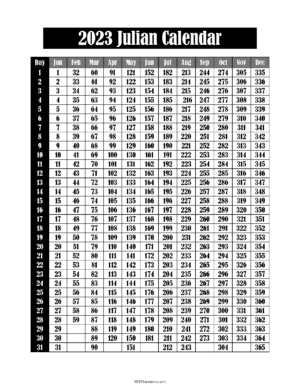 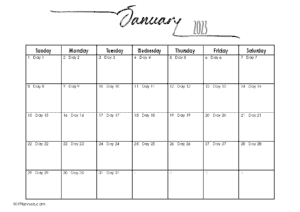 How many days into the year are we?

What is the Gregorian calendar?

Within a year after the invention of the Gregorian calendar, the Roman Catholic German states, Italian states, Spain, and Portugal had started to use this calendar. Other states eventually came on board, for instance, Great Britain in 1752, Protestant German countries in 1699, Sweden in 1753, China in 1912, Greece in 1923, and Japan in 1873, among other countries.

However, in 1700, German Protestants switched over, followed by England Protestants in 1752. The orthodox countries continued to use the Julian calendar for years before adopting the new style calendar. Their national churches have never embraced the changes to date.

What is the difference between  Julian and Gregorian calendar?

The Gregorian calendar is only a minor modification of the Julian calendar. The main difference between the two calendars is the number of days in an average year. However, the two calendars feature two types of years, the leap year and the standard year that has 365 days.

GREGORIAN CALENDAR
JULIAN CALENDAR
Every year has an average of 365.2425 days
Every year has an average of 365.25 days
It’s the new style calendar invented in 1582 and currently used in most countries.
It’s a 365 days calendar invented in 46 B.C., only used by some orthodox states.
Leap years don’t always occur after four years. Every year divisible by 4 is a leap year. Similarly, years divisible by 4 and 100 and also evenly divisible by 400 are also leap years.
Had a leap pear in every four years
Click to rate this post!
[Total: 0 Average: 0]